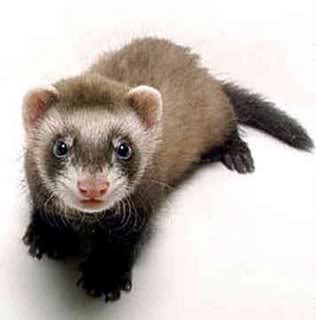 Ferrets are not wild animals, and do not survive well out on their own - especially in areas with more extreme climates. They have been domesticated for around two to three thousand years, and it is believed that their ancestry can be traced back to European polecats. They were used as hunting companions when "ferreting out" small burrowing animals such as rabbits and rodents. Their hunter and farmer owners would wait for the pests in question to flee the tenacious ferret so they could then kill them out in the open. It is believed that the ancient Egyptians and Greeks kept them as pets. Ferrets are animal kingdom cousins of weasels and otters.

Ferrets are spay/neutered and surgically "de-scented" at the same time, however they will still have somewhat of a musky odor about them. This bothers some people more than others, but any company you have over will almost surely notice. Pet stores carry specialty ferret shampoo which is mild on their skin, and scented to deodorize them. Opinions on frequency of bathing vary, but once a week is probably the best bet for keeping them company-friendly. Fill your bathtub up just far enough so that the ferret can still stand at the shallow (tubs are generally tapered) end, but must swim at the drain end. Getting your ferret used to this routine at a young age will make things go much more smoothly as they get older, but as with all pet, some are going to like bath time, and some are not. Apply a conservative amount of shampoo to your own hand so that it has a chance to warm up, and give your ferret a good massaging rub-down. Don't be shy, make sure you get everywhere and rinse the shampoo out thoroughly.

Careful claw trimming should be done every 2 weeks or so with the same type of special clippers used with cats. The illustration here shows the proper angle to trim their claw at, this can actually help with their balance. It's a good idea to keep styptic powder handy when trimming their nails, this will stop the bleeding should you accidentally nick the blood supply for the nail. (shown as the red area in the illustration, and called the "quick") Brushing can be done as desired with a soft bristle pet brush, but ferrets don't tend to stay still long when they are awake, so you may have to settle for a quick swipe or two from time to time rather than a full coat brushing.

Ferrets seem to do well with cats, and possibly small dogs, there is even video (seen here) of them playing with a hedgehog. A word of caution for ferret vs. cat play-fighting, this almost always ended with my cat whining and his face pinned to the ground. One of my ferrets would end up latching onto his muzzle and twisting downward until my cat gave up.

Ferrets have very thick, tough hides - especially for their size, so there's no real concern with a cat, but I would worry about a dog's sheer size making even playful pounces & nips dangerous for the ferret.

Retrieved from "https://petcare.fandom.com/wiki/Ferrets?oldid=4659"
Community content is available under CC-BY-SA unless otherwise noted.